The race course is bloomed, and the trail is ready for more footprints!!

In true trailrunning fashion, the elevation change is definitely present in this race!!!!
Gain and loss is around 600 feet per loop. About 1800 for the half marathon distance!!!! That's a good day, right there! 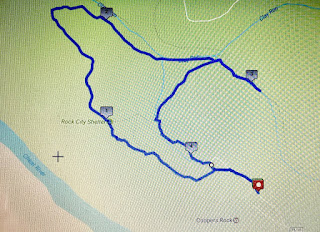 A highlight is definitely Rock City at the start of each loop, followed by a descent to the stream. Several bridges follow. And then what went down...well, you know...goes up!

Posted by UltrasAreHealthy at 2:09 PM No comments:

Rocky, Rooty, Hilly Half marathon on single and triple track. Scenic and unique race. Start and finish is near beautiful view over Cooper's Rock. Race proceeds near cliffs, streams, and through trees and rhododendrons.


Directions:  Take Exit 15 off I-68 (just east of Morgantown, WV.) Turn toward Coopers Rock State Forest and follow the main forest road for 3 miles until reaching the Overlook Area and Parking Lots.

Packet pickup: 7:15am-8:15am race morning
Course: 3 loop course, approx. 4.4 miles per loop. (4.4, 8.8, and 13.2 miles). Trails include Rock City, Ridge Trail, Clay Run, and Rhododendron. There will be roots, rocks, and hills!
Aid Stations: At start/finish area after each loop.
Rules: No pacers. Dogs allowed on leash. Must notify race volunteer if you are dropping out. Race officials may pull you from the course if they believe you are unfit to continue. Must follow marked course the whole time.
BONUS for not complaining and staying positive and encouraging around all other racers!
Hydration: Everyone must have a water bottle! It's a cup-free race.
Drop bags: You may leave bags at the start/aid area, but must check in after each loop before going to get supplies, bags, and hydration, etc.
Shirts: A4 brand performance tees
Waiver must be signed by all participants.
Elevation: 1800 feet of gain
Registration link: https://ultrasignup.com/register.aspx?eid=7684

Posted by UltrasAreHealthy at 9:25 AM No comments:

This event was a success!!! It was freezing and fun and the trail was feathered with fall foliage.

The course was a nice out and back uphill then downhill setup.

We had a female winner, a birthday, a recovering marathoner, and more!
Miles of smiles indeed.

Looking forward to the event next year!

Next up......SERIOUS WINTER MILES
and a half marathon in May/June at Coopers Rock!!!!!
Stay tuned.
See you on the trail!
Posted by UltrasAreHealthy at 4:48 PM No comments:

AWARD: everyone gets the race's custom MASON JAR

WINNERS (one male, one female) each get a gold mason jar!


($10 for 10k) $15 if registered by Oct 14, then $20. No race day registration. The fee is to hold your spot in the race. On the registration site, you can opt to GET THE $10/$15 BACK after completing the race! :) Or you can choose not to get it back, and it will be a donation to cover snacks and awards. Thanks! (We want to keep it simple and cheap, but have witnessed that many people don't show up for free events they signed up for if it rains, etc. And that leaves no room for those who still want to run.) No refunds for no shows.

Volunteers: You also get a mason jar. To volunteer, or for other questions,  email whatultra@yahoo.com by Nov 6.

START: 8:00 am at Mellon Chapel Parking Area     CUTOFF: 12:00 pm
DIRECTIONS: from 3708 Earl L Core Rd, turn right onto Beulah Rd. Turn left into the parking area when you see Mellon Chapel (of Grace Bible Church) on the left.
NOTE: There are no restrooms at the start or aid station. Hit the gas station before you arrive. (Sorry for the inconvenience. This may be a deal breaker...I understand.) Then again, you could always use your mason jar...
The trail is fine, crushed stone. It will be an open course and may have pedestrians and bikers. The course is uphill to the turnaround and then downhill all the way back!!!
TURNAROUND: The start is at mile 5.9 and the turnaround is at the Masontown parking lot (MILE 13.5).
Water and light snacks will be at the halfway point (the only aid station/timing checkpoint). No drop bags, so carry what you need or have a friend meet you at the turnaround.
There will be volunteers making sure that you made it to the turnaround point. After all, no one runs 15 miles in 40 minutes. :)
10k TURNAROUND: We (RD included) will run out 3.1 and back 3.1. The turnaround is the permanent wooden 9 mile marker. Afterwards, we will wait for the 15 miler-ers and cheer them on!
Keep track of your own time & record it at the finish (for 10k)!

Low-key, no frills, no complaints event. Water, light snacks and fruit provided at the FINISH. Feel free to bring food and drinks for yourself or the group (no alcoholic beverages permitted).
Parking may be limited, so come early. Old school timing with humans and clipboards-no chips or computers needed!

LIMIT- 50 runners only. Sign up quickly. The goal ain't money or fame. We are keeping it little and local. Come ready to make friends!
Registration is on  ULTRASIGNUP.com starting September 13!
CLICK HERE TO REGISTER: https://ultrasignup.com/register.aspx?eid=6022

Posted by UltrasAreHealthy at 5:02 PM No comments:

Trail running in Morgantown, WV!!!!! The land of the Mountaineers and a true gem of the east!! The options are as plentiful as the hills.

Training:
A local favorite, of course, is Cooper's Rock State Park. It has over 30 miles of trails, a bunch of awesome views, technical terrain, and options for either rolling hills or serious climbs. This is the best place for a trailrunner to find an epic and freeing run.

For an urban adventure, run the Mon River trail, Caperton Trail, or Decker's Creek trail. Hop on one of those suckers and enjoy a waterside out-and-back. Run to Pennsylvania and back, enjoy a flat stroll, or do an uphill-downhill run on Decker's. These trails are always bustling with people, bikes, canines, and downtown smiles. But they are over 15 miles long, so it's easy to find some peace and quiet on the far side of the trails.

There are many short run options, too: White Park, Prickett's Fort, Dorsey's Knob for a special climb and 360 degree view, or Friendship Hill across the border in PA.
Ohiopyle State park is not far either.

And of course, for those unafraid to travel the unique paths, there are gnarly fire roads just about everywhere. Just don't trespass too much and don't forget to wear bright colors so you don't look like a juicy hunk of venison to a hungry hunter.

Be looking for more races by yours truly coming in 2017 to promote the challenging and beautiful trails of northern West Virginia and to show the world a dose of  good sportsmanship!!!!!
Posted by UltrasAreHealthy at 4:05 PM No comments:

The war began with tipped-over-portajohns and an ominous forecast for lightning with all the accompanying rain and torturous thunder. The volunteers were the warriors to prop the still-functional-for-survival johns back up, set up canopy tents as evening barracks, and got the inevitable battle rolling. The race bag issued an epic helmet of glory to all of the runners: a trucker hat with the Bad Marsh logo of the sunset that the runners would soon be adamantly chasing.

The troops were warned of the road crossings, dreaded hill, and impending doom that was heat exhaustion. They had come prepared, gathered, volunteered, and drafted from all over the South and beyond.

The orange course markings would become quite the hard find in the night vision that the running soldiers would soon possess. But that was only a small shred of their worries. Four o'clock sharp (aka 1600), and they were off to battle, like a pack of wild dogs chasing down a meal of highly satisfying Swedish Fish. Their fangs would drip red from their newly found plunder.

The first lap brought a cluster of runners and race numbers, like the front lines armed in Kevlar, blurry in passing. Hydration packs storming with salty sea waters bobbed down the trail like destroyers taking over the oceans of the navigable world.

The element of sweat had not yet peaked, but there was still clearly a brutal heat and humidity present. It was to be expected, of course. But thank the (only) 90 degree heavens that the longest heat streak in the history of Georgia had ended a few days ago. The rain was a welcome ration to feed and fuel the spirits of this infantry.

Laps continued. Runners dropped. The remaining troops busted out the MREs like swamp lions rising from an afternoon nap. Chips and salsa, cookies, Coke, PBJs, watermelon, and chocolate cake washed down with Gatorade greener than lime-tinted watercolor paint in a 4th grade art class kept them moving and surviving.

Half marathoners began to finish. More of them finished than had started. The above 100% finish rate had arisen out of the difficulty of the 27 and 31 mile distances. People were dropping distances like sandflies.

There were heat cases. And vomit. And chills. And peak season for aforementioned quantities of sweat. And dehydration. And casualties. We sent out the medics and handled things with the encouragement typical of anyone with a red cross on their shoulder. The troops were finding out their limits.

A few hours in, and concerned runners raced to the aid station checkpoint yelling, "Man Down!" Apparently one runner was laying facedown on the trail telling his fellow warriors to continue without him.  We sent a tank in his direction. Over a mile is no cake walk when you are zapped of energy, endurance, electrolytes, and emotion. He called it quits and agreeably headed back to rest on the camp chair stretcher.

Later, a mighty woman warrior came to take the overall win, and the first place man of victory was minutes behind her. He was not taking the aftereffects of battle with total relief and physical triumph.  He was feeling sick and the cramps had set in like bullet wounds. And you will never guess what happened next. The man who had been eating dirt rose from the trail grave, got out of his chair, and marched over to him, coaching him through his bouts of heat-induced nausea and misery. It was brotherhood in the shirtless flesh.

Hours passed, darkness fell, and the peaceful moon planted itself like a monumental white flag in the night sky. Troops were on the mend, and battles were being concluded and won. They cheered on their comrades and threw a welcome home celebration of 'Merican Mountain Dew and Jelly Beans of Justice.

Sixty-eight pairs of human feet had taken off like a blazing cavalry that day, and only thirty pairs had completed the full journey, but everyone had played a valiant part in winning the war. One man had conquered his 315th ultra-battle. And many fought their first. They had tested their astounding limits of strength...a test which would prove to be great training for the next battle.
Posted by UltrasAreHealthy at 5:15 PM No comments:

Posted by UltrasAreHealthy at 5:12 PM No comments: 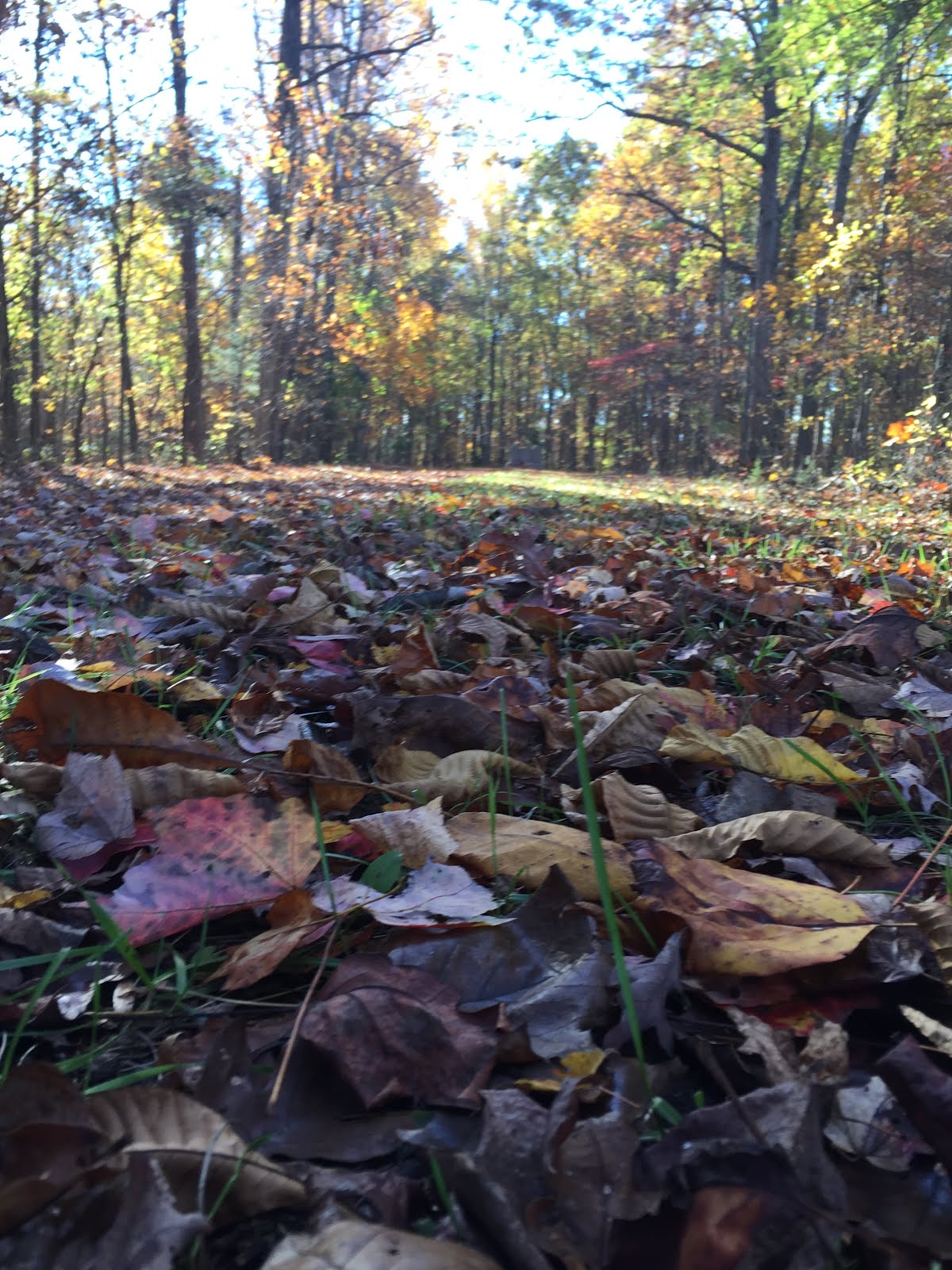 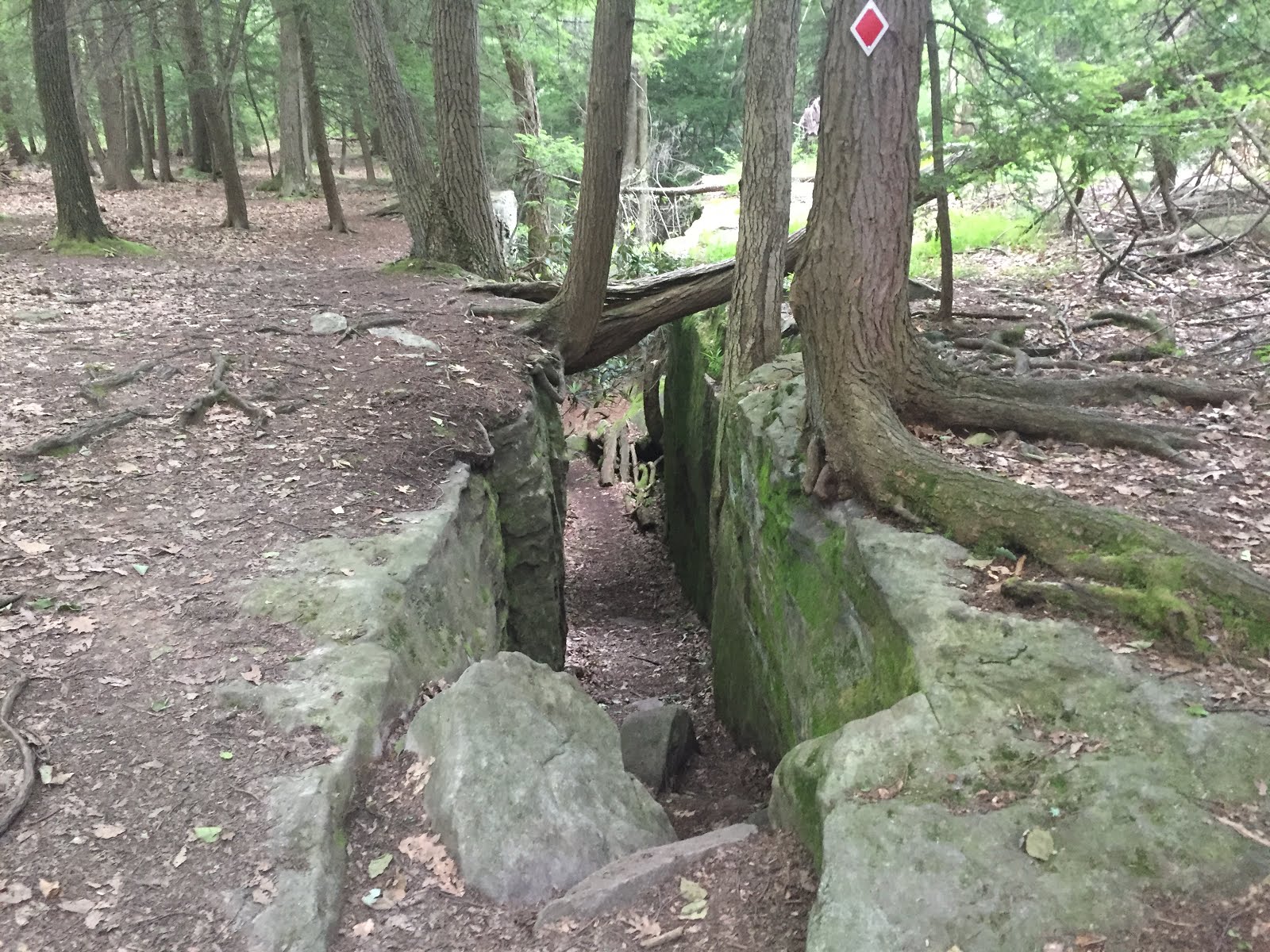 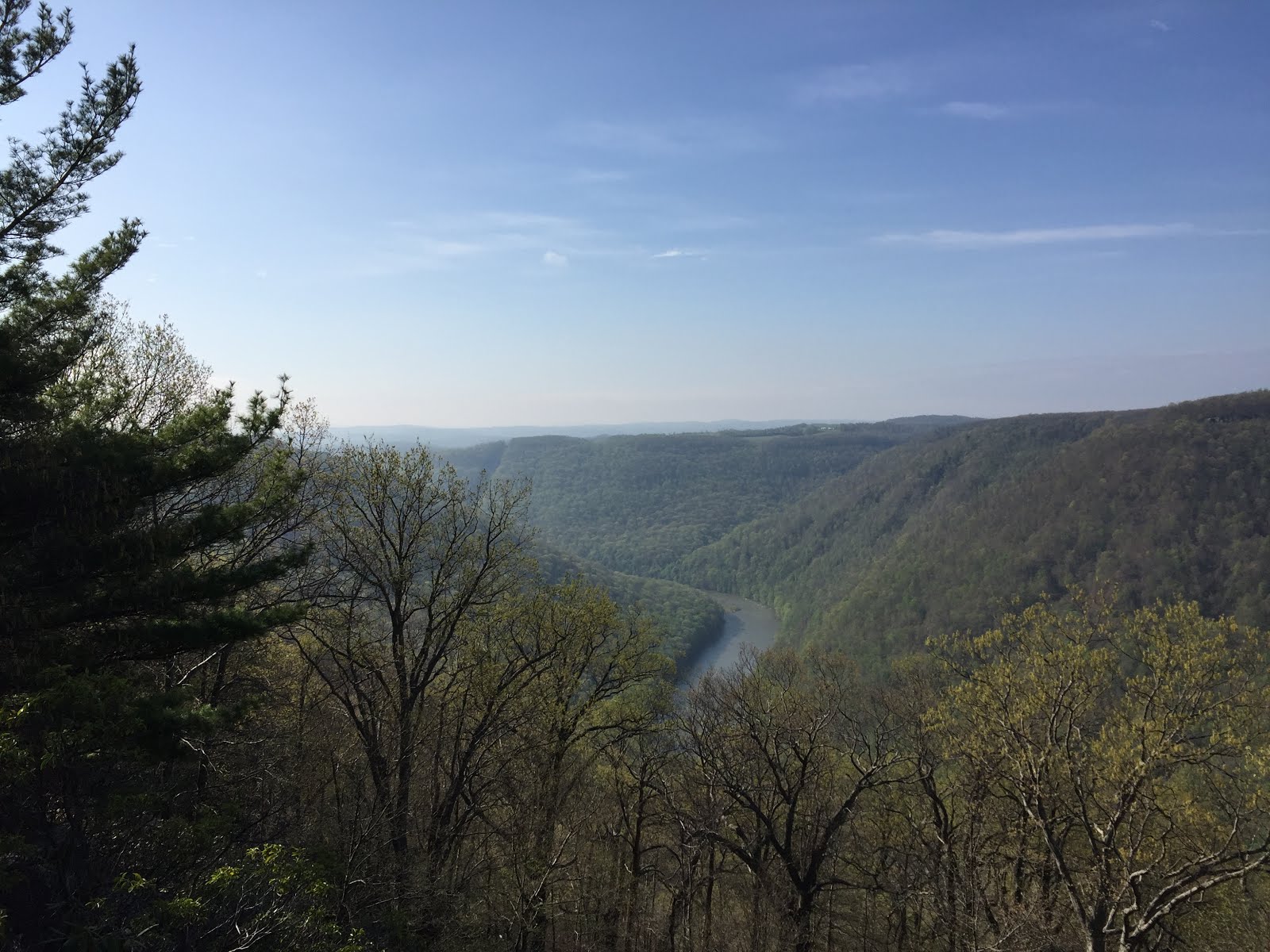